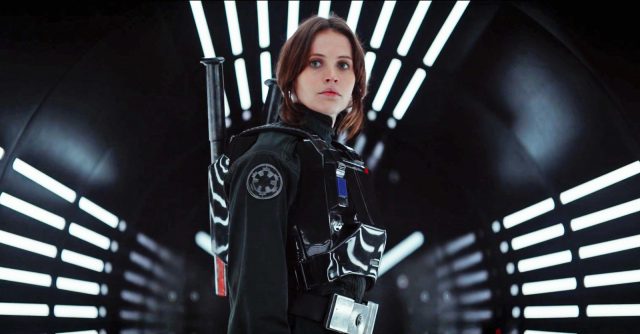 The second and potentially final Rogue One: A Star Wars Story dropped online, delivering fans a bit more character background into actress Felicity Jones’ Jyn Erso.  Actor Mads Mikkelson appears as Erso’s father in flashback or a prologue.  Voiceover narrates his integral involvement into the construction of the Death Star.

Previous trailers leaned towards a nearly hopeless galaxy.  An unchallenged Empire rules.  However, this trailer teases victory for the rebellion.  Conveniently, Erso speaks the words, “We have hope!”  A nod to the Star Wars episode that succeeds this story, Stars Wars Episode IV: A New Hope.  The promotional video delivers an epic auditory aesthetic, promising of glory for a team of insurgents.

The backside of Darth Vader’s helmet shows in a shot with Ben Mendelsohn’s Orson Krennic.  Krennic also appears in Erso’s flashback.  Primary antagonist appears to be his role with cameos from the former Jedi formerly known as Anakin Skywalker.

The trailer pivots from the darkness its predecessors.  The score lightens up an already visually dark trailer.  It provides a sense of hope before ‘A New Hope’.  Rogue One: A Star Wars Story hits theaters December 16, 2016.