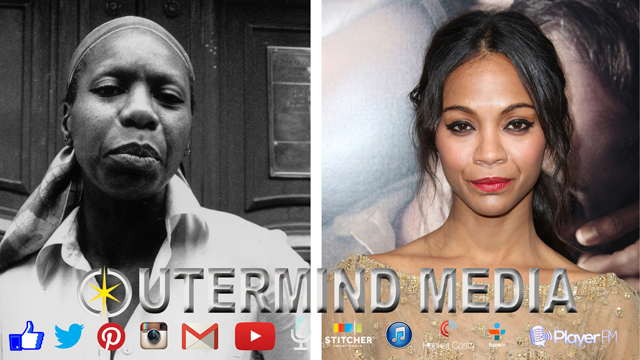 Discussion of the Nina Simone film, Nina and the controversy surrounding it. Reasons why the anger towards the lead, Zoe Saldana is misplaced. Why some blame needs to go to “Black Hollywood” and a reality check for people on the entertainment industry.

For more news, review and content, go to http://www.outermindmedia.com

Below is an article from 2014 discussing the casting of Saldana as Nina Simone.

The Nina Simone biopic titled Nina that debuts at the Cannes Film Festival this weekend has received some potentially unwarranted controversy due to what some would call a form of “white-washing.”  Potential viewers got upset when the news came out that Zoe Saldana (Colombiana, Avatar) was cast as the title character because of the deviation in skin-tone and facial features between the actress and the iconic figure.  Simone had more pure African features; protruding lips, round flat nose and more notably darker-toned skinned.  Saldana is an Afro-latino woman who has a much lighter skin in comparison to Simone and her features are not as strong.

A major issue that Simone had in her life was being accepted because of skin-tone and strong features.  That aspect of her life may be diminished in the film or potentially eliminated just as certain struggles in the life of Dr. Martin Luther King Jr. will not appear in his upcoming biopic.  According to IMDb, the film will center around Simone’s rise to fame and relationship with manager Clifton Henderson.  No details of skin-tone issues have been made.

Singer Mary J. Blige was originally cast for the role and there was little to no controversy surrounding her playing the lead.  Blige had to leave the project due to shooting being pushed back and her schedule.  Director Cynthia Mort had to recast and she selected Saldana.

People have mentioned names such as Viola Davis (The Help), Lupita N’yongo (12 Years A Slave) and even singer/songwriter India.Arie who are more visually suited to portray Simone.  However, there are potential logistical reasons as to why the first two aforementioned women could not be cast.

The disapproval of Saldana’s casting may not be about skin-tone, but may be about logistics in completing the film that had to postpone production.  The film can be based on her accomplishments and her black pride.  If this is an all around quality film, it may achieve its goal of obtaining distribution.  It is also important to note that this film is a period piece with an estimated budget of $7,000,000.